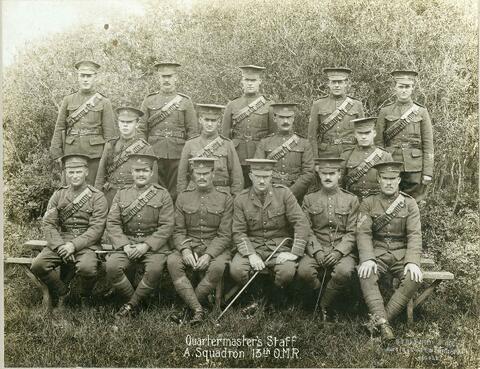 Archibald Piper was born on February 14, 1887 in Sorn, Ayrshire, Scotland. He attended the Sorn Public School and by 1901 had become an apprentice blacksmith for his uncle at Craighill, Mauchline. He enlisted with the Ayrshire Yeomanry to serve as a soldier in the Territorial Force of the County of Ayr. Archibald was discharged on May 13, 1910 after serving for two years.

On March 19, 1910, Archibald left Scotland for Canada in search of a new life. According to the 1911 census, he was a blacksmith living in Blairmore. He later moved to the Pincher Creek area where he would meet his future wife Eliza.

At 28 years of age, Archibald enlisted in the Canadian infantry on February 18, 1915. He became a farrier Sergeant with A Squadron of the 13th Regiment Canadian Mounted Rifles and trained in Calgary before departing for England on the S.S. Olympic on June 29, 1916. Eliza and their ten-month old daughter Ellen also travelled to Ilford, Essex, England in order to be closer to Archibald. Their son William Archibald Piper was born there on June 18, 1916.

Archibald travelled back to Canada after the war on March 22, 1919. Later that year he and his family moved to Tuxford, Saskatchewan where he started a blacksmith business. They had a second son Frederick James Piper on May 22, 1920. In 1929 he began selling Massey-Harris farm equipment as well as Imperial Oil. Archibald became the town Overseer and eventually Mayor of Tuxford.

Eliza Piper died in October 1940, and Frederick Piper died over Germany in 1943 during the Second World War as he was piloting a night raid. Archibald married Edith Pittman Wallin in November 1943.

In 1957 Archibald retired and moved to White Rock, British Columbia. He died on November 5, 1964.

All photographs have been photocopied and added to the main photograph collection as 2018-83 to 2018-86.

This fonds was wrapped in interleaving sheets, wrapped in mylar, and boxed in 2018.