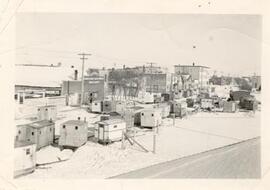 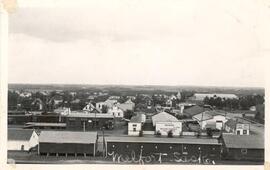 Dagmar Flett (nee Nygaard) and twin brother Chris Nygaard were born January 31, 1908 in Denmark to Walter Christian Nygaard and Kristina Nygaard (nee Merk). The Nygaard family emigrated from Denmark to the Belgrave, Saskatchewan district in May of 1914 when Dagmar was six years old. They were met by Dagmar's uncle Otto at the Melfort train station. Dagmar married James ("Jim") Flett on June 25, 1929, with whom she would have three children. Following the marriage, the Fletts lived beside the livery barn on Saskatchewan Avenue across from the railway station. While living in this location, they had a taxi business which included one car and a team of horses during the winter. This business was continued until 1939. At one point, the barn caught fire, but as only the loft was damaged, the lower level was still usable and the business was able to continue. During the 1940s, Dagmar managed the boarding house at the Melfort Experimental Farm. The Flett family moved to British Columbia in 1956, but returned to Melfort in 1992.

The fonds contians two black and white photographs from Dagmar Flett's personal collection. One photograph is of Melfort, Saskatchewan looking south over Saskatchewan Avenue, taken from an elevator in the 1920s. The second photograph depicts cabooses stopped at the Melfort livery stable, and was taken in the 1930s.