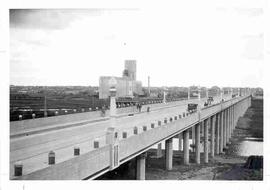 A Train and A Grain Elevator

A moving train with a grain elevator in the background

26 items showcasing the grain elevators and seed cleaning plants in the Rosetown area. Nine men, one child and one dog standing in front of a grain elevator in Argo, Saskatchewan 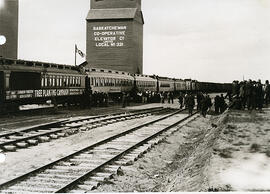 Bio/Historical Note: From 1914 to 1922 a Better Farming Train (BFT) toured the province providing lectures and demonstrations and presenting exhibits on matters pertaining to agriculture. Funded by the Agricultural Instruction Act, equipped jointly by the Department of Agriculture and the College of Agriculture, and staffed by the University of Saskatchewan, the BFTs were operated free of charge by the railways. Consisting of between 14 to 17 cars they toured the province for several weeks each summer. During part of one summer two trains operated. The train was divided into five sections: Livestock; Field Husbandry; Boys and Girls; Household Science; Poultry; and Farm Mechanics. A converted flat car acted as a platform for the display and demonstration of the "well-selected" horses, cattle, sheep, swine and poultry. Each section usually contained a lecture car accompanied by one or more demonstration cars. 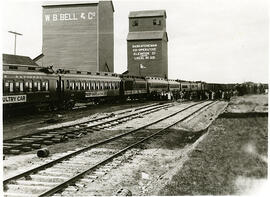 Bio/Historical Note: The Better Farming Train served as an agricultural college on wheels. Sponsored by the Provincial Government and the Extension Department of the University of Saskatchewan, these trains were in common use during the summers from about 1914-1922. Consisting of lecture, exhibit, and demonstration cars, visitors were informed concerning agricultural products, equipment, and practices. Broadway and First Ave., about 1909. Taken from a window in the lake of the Woods elevator. The C. P. R. wind mill, water tank and round house n the foreground. 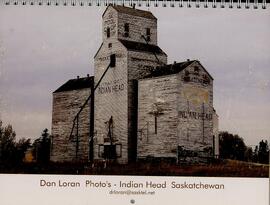 A 12-month calendar for 2020 with photographs of the demolition of Indian head's last wooden grain elevator in 2019 by Russell Construction Ltd. One man sits on a wagon pulled by two horses while another man stands beside. Behind them towers Zealandia's Canadian Elevator Co. Limited grain elevator 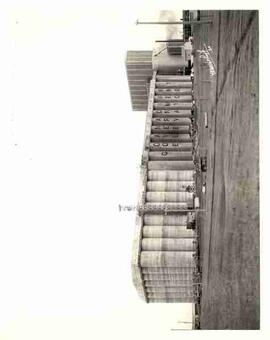 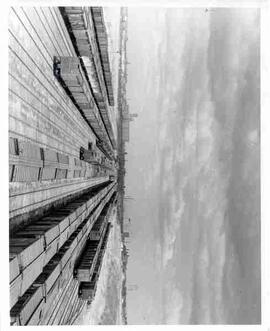