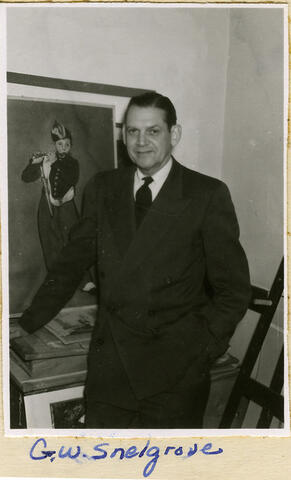 Bio/Historical Note: Gordon W. Snelgrove (1898–1966) was a painter, art historian and one of the first people in Canada to receive a PhD in art history. In 1936 he served as professor of art and art history at the University of Saskatchewan’s Regina campus. Later he joined the University of Saskatchewan’s Saskatoon campus as head of the Art Department and remained in that position until his retirement in the fall of 1965. He died in February 1966. The Gordon Snelgrove Gallery was opened in the basement of the Murray Building in 1966. It serves as a venue for students to showcase their work and acts as a tribute to a man devoted to art and teaching new generations of artists. It also curates the collection for the department of art and art history, comprised of select works from graduating students that are displayed throughout the campus.