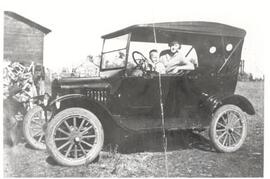 Betty (Flodell) Nelson and child, Eric Edwin Wickberg sitting in a Model T touring car. Unknown man kneeling at the front of the car with a shed and woodpile behind him.

The collection contains 24 photographic reproductions of original photographs of members of the John Carlson family, local farming activities, and farm equipment. Several depict views of Melfort in early states of development. Historically significant images include that of a Mr. and Mrs. Bagshaw at "Melfort House" in the U.K.

Tractors and seeding equipment, one-way with a seed box, in front of a row of grain bins. A wooden wheeled grain wagon is at the right. 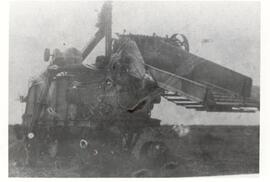 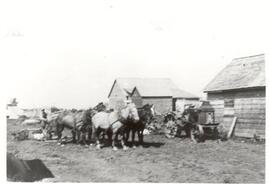 John Carlson and a horse team

A portrait of John Carlson (left-age 19) and Charlie Anderson (right) taken in 1903 Before they left Sweden to come to Canada.

John Carlson (L) and Herbert Hampton with two other men standing in front of a truck.

John Carlson (L) and his son Albert sitting on a Seaman 6FT tilller with a 90HP Engine. It was brought up from the United States to Calgary. It was the only known type of machine in the area at the time.

A team of horses driven by John Carlson hauling a wagon and a tank. A dog is seen at the left. 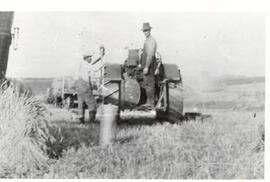 John Carlson on a tractor

John Carlson on a 20-30 Rumley oil-pull tractor. A field of wheat stooks in the foreground. Man standing at side of tractor. 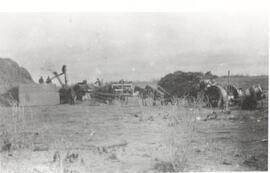 A side view of John Carlson on his Oliver Standard 70 tractor . It has rubber tires on the front and steel on the back. It is pulling a steel-wheeled plough.

A dual wheeled 1941 Dodge pick-up truck owned by John Carlson. A building is in the background with poultry in front of it.