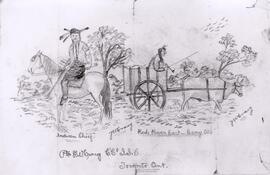 Pencil sketch from about 1885 signed by J.W. Craig of Toronto. Two men, one on a horse and the other in a Red River cart pulled by an ox with trees in the background. 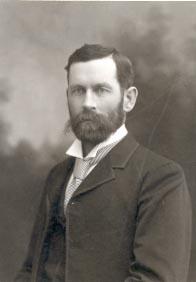 Head and shoulders image of Levi Thomson, member, first Board of Governors of the University of Saskatchewan.

Bio/Historical Note: Levi Thomson, KC (1855-1938) was born in Erin Township, Canada West, He began the study of law in Toronto but then moved west in 1882, settling on a farm in Wolseley, Saskatchewan. Thomson completed his legal studies in Regina in 1894 and practised law in Wolseley. He served as crown prosecutor from 1897 to 1904, resigning to run unsuccessfully for a seat in the House of Commons. Thomson was an unsuccessful candidate for a seat in the Saskatchewan assembly in 1905. In 1913, he was named King's Counsel. He served on the council for Wolseley from 1889 to 1903 and was mayor in 1904. Thomson also served on the first Board of Governors for the University of Saskatchewan. He died in Wolseley at the age of 83. 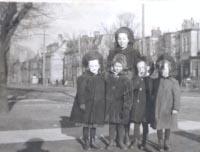 The three Murray daughters, Christina, Lucy, Jean and two unidentified friends standing in a group. Houses and trees line a street in background. 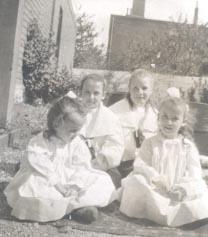 Lucy Murray and Jean E. Murray seated on a bench with three unidentified friends; all wearing hats and coats. One girl holds a doll carriage with a doll in it. Building in background.

The three Murray daughters, [Christina], Lucy, and Jean, sitting in a doorway on a house step, a fourth unidentified child sits on one of the lower steps. One child holds a broom another holds a racket. All wearing coats and hats. A "For Sale" sign visible beside the entrance.

The three Murray daughters, Christina, Lucy, and Jean, standing with an unidentified friend, wearing coats and hats. Three of the children are pushing doll carriages. Trees and houses in background. 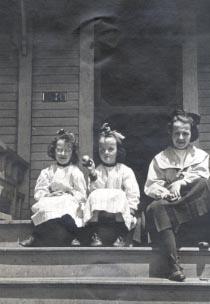 The three Murray daughters, Lucy, Jean and Christina, sitting on the top step of the outside stairway of a house. Each girl has a large ribbon in her hair. 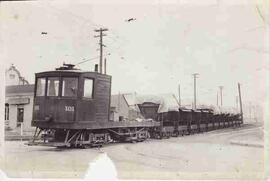 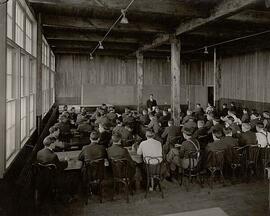 Field Husbandry (Crop Science) class in session; view from back of class looking towards professor. 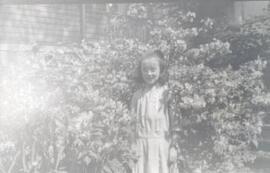 Jean E. Murray standing in some bushes at the side of a house; stairs in background. 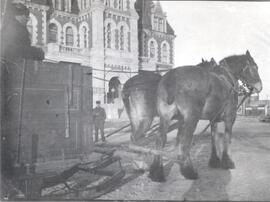 Two [Percherons] horse team hitched to a sleigh in front of a [castle school in Saskatoon]; brick building and man in background. 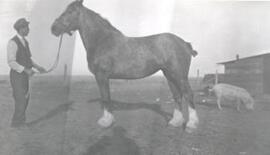 A champion shire horse, British breed of large heavy draft horses, at Toronto and Ottawa, being held with a halter in a yard. Pigs and buildings in background. 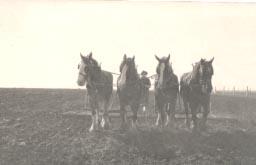 Man driving a four-horse team pulling a set of harrows in a field; fence in background.