An instructor uses a piece of machinery to give instructions on the use and care of modern tools. A group of students are seated at work benches.

An instructor uses a piece of machinery to give instructions on the use and care of modern tools. A group of students are seated at work benches.

An instructor stands before a diesel tractor giving practical instruction on farm tractors to a group of students.

A student performs welding before an instructor and three classmates in the welding laboratory.

An instructor stands at the front of the classroom giving instruction in a Crop Science class. The backs of the students face the camera.

An instructor with a small group of students points to a machine in the Practical Farm Wiring Studies class. 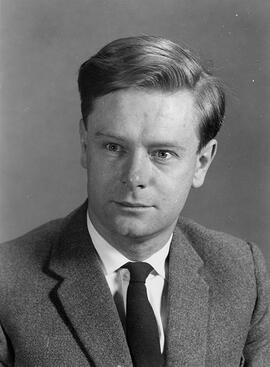 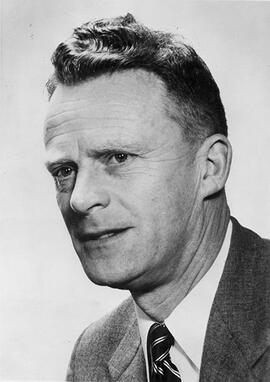 Bio/Historical Note: Arthur J. Porter was born in 1910 in Ulverston, England. While studying at the University of Manchester, Porter helped build a differential analyzer - one of the world’s first analog computers, using a Mecanno construction set. In 1937 he accepted a fellowship at the Massachusetts Institute of Technology (MIT). Porter helped build the Rockefeller differential analyser - the most ambitious analog/digital computer built to date. It was used extensively for projects during World War II. In 1949 Porter accepted a position with Ferranti Canada and worked on the DATAR system. DATAR combined data from a convoy of ships’ sensors, providing a single ‘overall view’ that allowed the commander to make better-informed decisions. Soon afterwards, in the early 1950s, Porter was one of six Canadians selected to work on Project Lamp Light; working on data processing expertise was crucial to this top-secret North American air defence initiative. In 1958 Porter became the fourth dean of Engineering at the University of Saskatchewan. There, along with Norman Moody and Dr. William Feindel, Porter established Canada’s first biomedical research program. In 1962 Porter moved to the University of Toronto to chair their new Industrial engineering department - one of the first in the world. While there, Porter also helped establish the University’s biomedical program. During the late 1960s he was involved in projects that bridged the gap between culture and science. He was the first acting director of the University of Toronto’s Centre for Culture and Technology. Porter also chaired the Science and Technology Advisory Committee when Montreal hosted the World’s Fair-Expo 67. Porter died in 2010 in Winston-Salem, North Carolina at age 99. 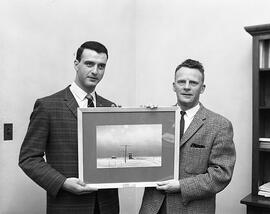 View looking northeast of construction of at nearly-completed addition.

Bio/Historical Note: The Law and Commerce Buildings were designed and constructed as part of a single project between 1965 and 1967. The architect was John Holliday-Scott of the Saskatoon firm Holliday-Scott & Associates.