This fonds consists of a journal , a photo album, a post card album and an autograph album of the Logan Family of Central Butte, predominantly Pearl Logan, kept in the late 1800's to the 1920's. Some photos are tin types, others are hand coloured. Several photos have the photographer’s identification on the back. They are from Ottawa and Winnipeg and the photos would have been taken in the late 1800's. Only one photograph is dated and identified. There is also a Bible that was presented to the Logan Family in 1909 from the Sunday School and Church in Manitou, Manitoba as a farewell gift. 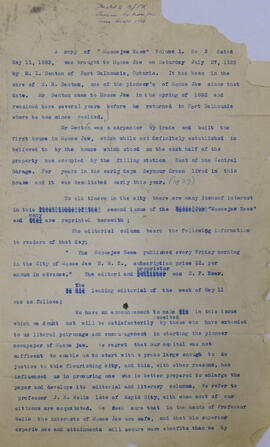 This fonds contains ephemera of the local history of Moose Jaw and area.