In terse, usually one line descriptions, the daily work of a male farmer on a mixed farm through the depression years are depicted. In addition to grain the couple raised both cattle and pigs; if there was also poultry this would presumably have been the purview of the woman and was not noted. Entries in a second hand are found at the back of the 1927 diary, primarily regarding quilting; and at the back of the 1939-1942 diary, noting household expenditures. At the end of 1929, the main author noted "Very poor year. Drought. Shortage of feed and water;" to which his partner appended, "All poor if you ask me???"

This fonds contains the autobiographies of Tony Wilson and his brother, Walter Wilson. Both accounts recall life on a homestead near Bengough, Saskatchewan just after the turn of the century, as well as their terms of service during World War II. The autobiography by Tony Wilson includes several copies of family photographs.

This fonds contains correspondence, minutes, reports, financial records relating to the administration of 4-H Clubs. Included are minutes of the Annual Meeting of Council (1957-1967) and the minutes of the Board of Directors (1962-1967).

Fonds primarily includes administrative and research files relating to the Matador Project and the International Biological Programme at the Canadian and international levels.

Fonds includes records relating to the Department of Plant Ecology's administration, teaching and research; extension work relating to the Saskatchewan Weed Survey; and correspondence with a variety of institutions and individuals. A series of minutes and correspondence relating to the Saskatchewan Committee on the Ecology and Preservation of Grasslands (established in 1935) documents the efforts to establish permanent reserves of significant grasslands in Saskatchewan. Records of the department and personal records of R.T. Coupland have often been intermingled; in particular, this fonds includes records relating to Coupland's research and other activities.

University of Saskatchewan. College of Agriculture. Department of Plant Ecology

This fonds contains an annual report for the Extension Division for 1918, various reports including "Good Farming Competitions in Saskatchewan," rules for ploughing match competitions, and a programme for the "Fifth Annual Farm Boy's Camp (1919)." In addition, there is information on the Agriculture Institute of Canada and the Institute of Agrologists, as well as 2 files of material on the Boy Scouts. The majority of the fonds consists of addresses on various topics, including "The Historical Development of Extension in Saskatchewan," "A Successful Example of Co-operative Production," "Field Crop Contests," and "History and Philosophy of Agriculture Extension," as well as talks concerning the Boys' and Girls' Clubs, the Homemakers' Clubs, poultry and field crop improvement, the University, leadership, and adult education. The final file in the fonds concerns the Rayner Memorial Fund, established through the Agricultural Societies Association. 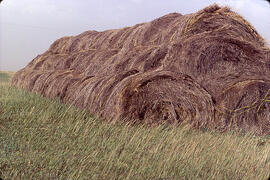 Rolled bales of hay are seen stacked in a field near Emma Lake, Saskatchewan.

This fonds contains materials relating to Sophia Dixon's interests in international relations; the various ideologies current in the 1930s and 1940s, notably labour and worker's rights, socialism, communism, social credit, and the rise of fascism during this period; local and international women's organizations, etc. In particular, this fonds provides a comprehensive record of the early Co-operative Commonwealth Federation (CCF) in Saskatchewan and Canada; the Farmer-Labor Group, Saskatchewan Farmer's Union, and United Farmers of Canada. Also included is a series of books and other reference materials collected by Charles and Sophia Dixon. 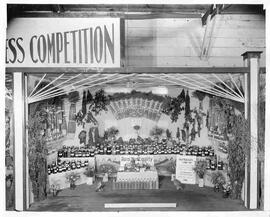 A display created by the Rural Municipality of Laird is seen. Samples of grain, spices and other agricultural products are present along side local wild flowers and wildlife. A sign is present to the right stating that "Rural Municipality of Laird is located 44 miles North of Saskatoon; Settled in 1901 with a population of [2960?] which was 75% being of Mennonite nationality and Won Second Prize in Community Progress Competitions 1930."

Bio/historical note: The Community Progress Competitions were conceived by Dr. W. J. Black of the Colonization Department of the C.N.R. to ascertain what contributions people of Continental European origin had made to community life in districts in which they possessed a resident population of 70% or more from the first or second generation, and to what extent they stimulated further community progress and development. They were judged on the basis of their educational efforts; agricultural development; citizenship, co-operation, and social welfare; arts and handicrafts; and general activities. These records were obtained by Dr. W. C. Murray in his capacity as one of the judges of the Community Progress Competitions. The records concentrate mainly on the first two years, 1930 and 1931, of the proposed five year competition for Manitoba, Saskatchewan, and Alberta residents. Only records on the Saskatchewan communities are included. They contain the assessments of the judges on community life on the districts that entered the competition. Financial statements and maps of many of the rural municipalities of Saskatchewan that entered the competition are included. Also, photographs of the districts that entered the competition for the years of 1930 and 1931, including many of the Edenwold district are included. The letters included are mainly those from the Western Region of the Department of Colonization and Agriculture of the Canadian National Railways to Dr. W. C. Murray. 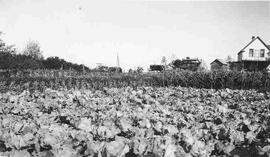 A farm house is seen from the garden on a prairie homestead near Bekevar, Saskatchewan. A tractor and harvesting machinery are also seen parked near the house.

Minutes, financial fonds, and publications "The Bull Sheet" and "The Antelope;" as well as miscellaneous ephemera.

This fonds contains correspondence, minutes, reports, and printed material relating to the administration and activities of the Agricultural Societies Association. Included are: a copy of the Act (with revisions); historical sketches of some local societies; correspondence and reports from over 175 local societies throughout the province.