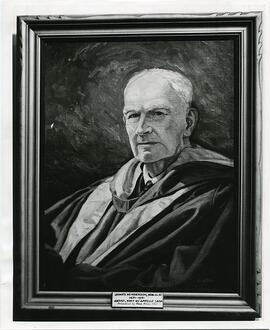 Image of painting of James Henderson by Ernest Luthi.

Bio/Historical Note: James Henderson was born in 1871 in Glasgow, Scotland. He enjoyed sketching and drawing from an early age, and began an apprenticeship in lithography when he was 16 years old (1887-1894) while taking evening classes at the Glasgow School of Art. He worked in London as a commercial artist, lithographer, and engraver (1894-1909) and in 1910, immigrated to Canada. Henderson worked briefly as a lithographic artist in Winnipeg before moving to Regina, Saskatchewan and then to nearby Fort Qu'Appelle in 1916. The picturesque Fort Qu'Appelle valley, as well as Henderson's trips through western Canada and Ontario, provided him with much inspiration for his oil and watercolour landscapes. Henderson is also known for his portraits of Cree, Sioux, Saulteaux, and Assiniboine people in Saskatchewan and Alberta. These portraits gained national and international recognition — a first for a Saskatchewan artist — and Henderson was also the first Saskatchewan artist who made his living from his art practice alone. Henderson's work was exhibited mainly in Saskatoon and Regina, but also in Ontario at the National Gallery (1927, 1928, 1930, 1936), the Montreal Museum of Fine Arts (1931, 1932, 1936), and in Ontario, Alberta, Winnipeg, and London, England. He exhibited portraits at the British Empire Exhibitions at Wembley in 1924 and 1925, and with the Royal Canadian Academy in 1936. Henderson's work is represented in the collections of the National Gallery of Canada (Ottawa), MacKenzie Art Gallery (Regina), Mendel Art Gallery (Saskatoon), Edmonton Art Gallery, Calgary Public Library, University of Saskatchewan, and Glenbow Museum (Calgary), among others. Among the honours Henderson received was being named Honorary Chief at Fort Qu’Appelle’s Standing Buffalo Reserve with the name Wiciteowapi Wicasa or “the man who paints the old men,” and receiving an honorary degree from the University of Saskatchewan in May 1951. Henderson died in Regina later this year. Henderson is the subject of a significant retrospective exhibition organized by and first exhibited at the Mendel Art Gallery in 2009. A website dedicated to his life and work has been produced in conjunction with the exhibition, James Henderson: Wicite Owapi Wicasa: the man who paints the old men.

Bio/Historical Note: Ernest Luthi was born in Zeebach, Switzerland in 1906. He came with his family to homestead in Canada in 1914, settling near Punnichy, Saskatchewan. From the age of 15, he worked in farming, carpentry, house and sign painting, and on the railroad over the next twenty years to support his art practice. Though Luthi was mostly self-taught, he did take correspondence courses in illustration from the Washington School of Art in the 1920s, and night classes in Pittsburgh, Pennsylvania at the Art Institute of Pittsburgh, earning his diploma in 1928. In 1951, Luthi became a full-time artist. Luthi's work has been exhibited in Saskatchewan since 1950. His landscape paintings in oil and watercolour reflect his interest in Saskatchewan's vast skies, prairie buildings, and farming life. He often painted these from his own photographs or pastel sketches. Luthi's paintings are represented in collections including the Government of Saskatchewan, MacKenzie Art Gallery (Regina), Mendel Art Gallery (Saskatoon), Saskatchewan Arts Board, and the University of Saskatchewan. In 1975, Luthi received an Honorary Doctor of Laws degree from the University of Regina. Luthi passed away in Punnichy in 1983. His home there, which he built in 1938, was designated a heritage property and converted into an art gallery.

Head and shoulders image of Itzak Bar-Lewaw, Professor of Spanish.

Bio/Historical Note: The University Crisis of 1919 became public on June 28 when the Saskatoon Star announced that four members of faculty had been fired without explanation. They were Samuel Greenway, Director of Extension; R.D McLaurin; Head of Chemistry; Ira MacKay, Professor of Law; and L.J. Hogg, Head of Physics. All were senior members of faculty with many years of experience. The affair had started in March of that year when Greenway had accused President Murray of falsifying a report about University finances. This complaint had been made to the government and not to the Board of Governors. In early April Council voted 27 to zero “affirming its confidence and loyalty to the President” while four members abstained. Three of those who abstained plus Greenway were dismissed as the Board put it, “in the best interest of the University.” The public and the press clamoured for an explanation. When one was not forthcoming, calls for a public inquiry were loud and persistent. In accordance with the University Act, the Lieutenant Governor assumed the role of Visitor and through the office of the King’s Bench held a series of hearings. The Visitor’s report was delivered in April of 1920 and vindicated the Board’s decision saying it was “regular, proper and in the best interest of the university.” The professors were not protected by tenure but were employed “at the pleasure of the board.” Their act of disloyalty was enough to cost them their jobs.

Bio/Historical Note: Ian Bickle was born 31 March 1931 in The Pas, Manitoba, He attended university at Western in London, Ontario, then moved to Saskatoon in the mid 1950s to begin a career in TV with CFQC. Bickle died in Regina in 2008.

Bio/Historical Note: Robert Iain Angus MacLean was born in a military hospital in Bramshott, England in 1941 to Major Iain and Christina MacLean. He graduated from Nutana Collegiate in 1959. He completed his B.A. in English (1962) and Diploma in Education (1963) at the U of S, where he played on the Huskies basketball team. He spent a year traveling in Europe and taught at Bedford Road Collegiate. By successfully petitioning the provincial Department of Education, he became the first to teach Harper Lee's novel To Kill a Mockingbird in Saskatchewan schools. In 1970 he began work at the U of S, in the College of Arts and Science. He was the founding president of ASPA and was active in community education being president of the Albert Home and School. His athletic passion was old-timers hockey and he was president of the old-timers division of the Central Men's Hockey Association. In 1984 he was appointed University Secretary, a position he held until his retirement in 2000. For several years he served on the board of 25th Street Theatre. After retirement he served on the boards of the U of S Faculty Club, the Saskatchewan Literacy Foundation, the board of the Riverside Country Club and the U of S Alumni Association. MacLean died in Saskatoon in 2015. 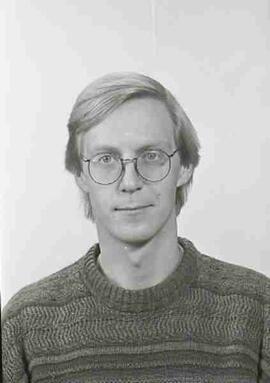