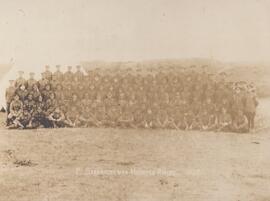 Group photograph of the 1st Saskatchewan Mounted Rifles in1923 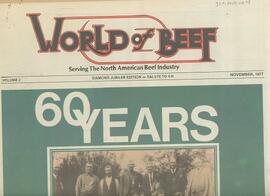 A trade newspaper (World of Beef) issue in four sections (144 pages total) celebrating the 60th anniversary of the 4H program in Saskatchewan and Alberta. Small yellow paperback book listing 81 Interesting places in Saskatchewan their locations a brief description and a black and white photo of each. Page 92 has an article about Indian Head's Bell Farm. 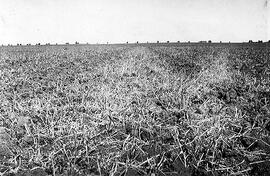 A field after cultivation

A field is seen laying fallow after it was cultivated with a V-shaped Noble Blade. 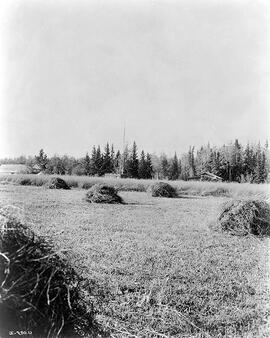 A field is seen with stacks of straw on it; two cabins and a barn are seen in the background. 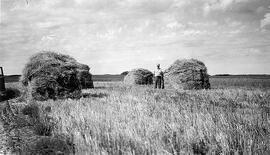 A man is seen in a field standing next to a "barge" stack of straw. Several more stacks are seen around him. 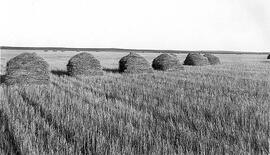 A field is seen with "barge" stacks of straw on it. Several more stacks are seen in the distance.

A trail and bluff in early spring

A dirt road is seen rounding a stand of trees on a bluff. 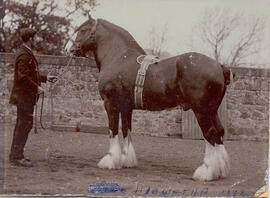 A Clydesdale stallion, Hiawatha, with cropped tail, four white legs and white face. Man at left holding bridle in yard with a stone fence in background.

Bio/Historical Note: By 1910, 19 horses had been purchased by the College of Agriculture that were good work horses or suitable for student class work. Two were purebred Clydesdales. Three light horses were also purchased. One named Barney was used in the morning to deliver milk to faculty in Nutana and in the afternoon on the buggy as Dean Rutherford made his farm rounds. In 1920 the Province asked the Animal Husbandry Department to establish a Clydesdale breeding stud. This led to development of an outstanding collection of prize winning horses that became a focus of the Department. In the 1920s the Percheron and Belgian breeders also demanded support for their breeds and so they were included in the university stud and some cross breeding was undertaken. The campus horses were used for field work for all Departments, general hauling and site work for new buildings. An unofficial use was for the Lady Godiva ride across campus each fall. By the 1940s it was clear that the era of horses as a main source of farm power was over. The final stallion used in the breeding program was the imported "Windlaw Proprietor," grand champion stallion at the 1946 Royal Winter Fair. 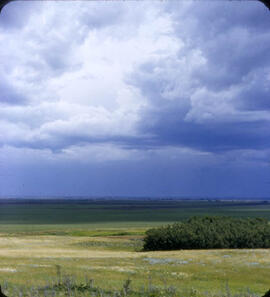 Clouds are seen gathering in the sky over the prairie fields. 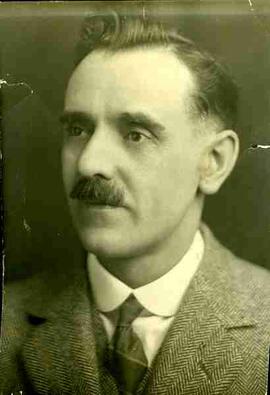 Portrait of Arthur Wilde in suit and tie 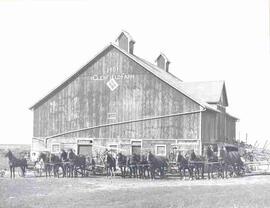 The Saskatchewan Bulletin Feb. 1953 cover and p. 6; "Being the month it is: salary negotiations and stuff like that, we couldn't resist this photograph supplied to us by the Department of Natural Resources. It also heralds a new cover series which will feature Saskatchewan nature and wild life." Forlorn bear cub perched on a tree stump.