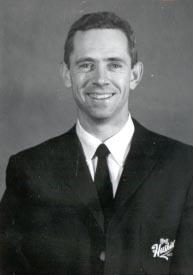 Head and shoulders image of Chesley (Ches) Anderson, coach of the University of Saskatchewan wrestling team.

Bio/Historical Note: Chesley (Ches) Anderson was born in 1928 in Danville, Virginia, but moved to Maryville, Tennessee at an early age and later studied art and physical education at Maryville College. After serving in the U.S. Marine Corps and completing more studies and work in physical education, he came to Saskatoon in 1958 to teach at the University of Saskatchewan's College of Physical Education. Anderson balanced his teaching and painting careers with extensive involvement in the Saskatchewan sports scene. As a wrestling coach for 13 seasons, he made history with a series of Saskatchewan firsts: he took the first Saskatchewan team to the Canadian University wrestling championships, coached Saskatchewan's team at the first Canada Winter Games in Quebec City in 1967, was the first chairman of the Saskatchewan Amateur Wrestling Association, and organized the first high school wrestling tournaments in Saskatoon. He was inducted into the Saskatchewan Sports Hall of Fame in 1993. Anderson's watercolour paintings depicting rural and urban Saskatchewan scenes reflect his fascination with the beauty and history of the prairies. In 1992-1993, he traveled around the province looking for unique wood and stone round barns, which inspired his series “The Round Barns of Saskatchewan.” Anderson retired from teaching in 1990. He died in Saskatoon in 2018. 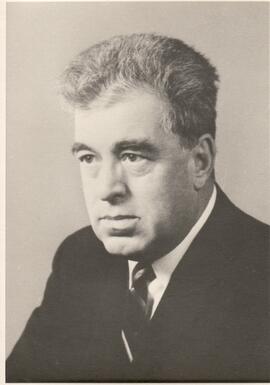 Wearing a dark coloured suit and tie with white shirt.

Head and shoulders image of W.F. Cates, Professor of Veterinary Medicine and Surgery.

Head and shoulders image of Carlyle King, instructor in English, then Head of English Department; Dean of Academic Services, and Vice-Principal.

Bio/Historical Note: Carlyle King (1907-1988) born in Ontario, received his education in Saskatchewan schools and at the University of Saskatchewan. He obtained Master of Arts and doctorate degrees from the University of Toronto. Commencing as an instructor in English at the University of Saskatchewan, he advanced to Head of that department, to Dean of Academic Services, and to Vice-Principal of the Saskatoon Campus in 1971 and Vice-President (Acting) in 1974. King retired in June 1975. His academic career has been marked by many scholastic awards. He has written and edited several books and published many articles. Dr. King has been active in community life with interests in politics, music and the arts. He has served as a member of the Saskatchewan Arts Board, a member and Chairman of the Saskatoon Art Centre and a director of the Saskatchewan Music Festival Association. In 1946 he was appointed Chairman of the newly created Saskatchewan Library Advisory Council which was instrumental in the appointment of the first regional librarian in 1947 and the formation of the first regional library system for Saskatchewan. In 1951, the Saskatchewan Library Advisory Council recommended the formation of a Provincial Library, separate from the Legislative Library, to co-ordinate and provide library service for the entire province. Dr. King was appointed to the Saskatoon Public Library Board in 1955, becoming its Chairman in 1958, a position he held until he retired from the Board in December 1972. He was president of the Canadian Library Trustees' Association. King died in Saskatoon in 1988.

Bio/Historical Note: Cedric Gillott is a native of Sheffield, England, and played for the University of Nottingham before moving to Canada in 1965. As a player he was with Saskatoon Spartans on the provincial championship team in 1966, the Saskatchewan All-Stars in the same season and captained Saskatoon City who won the provincial title in 1968. He coached the University of Saskatchewan for eight seasons between 1968 and 1978 and was responsible for Canada West soccer going from a weekend tournament to regular league play. He also coached youth teams, notably the provincial boys under-16 (later under-15) All-Star teams between 1981 and 1991 (including Canadian bronze medalists in 1983) and provincial champion club teams (Brunskill, 1981, 1983; Express, 1985; Titans, 1985). He coached the Saskatchewan men's team at the 1977 Canada Games and was assistant coach of the men's team in the 1993 Canada Games. Gillott was named Professor Emeritus of Biology.

Head and shoulders passport photo of Clifton A. Shook, Professor of Chemical Engineering.

Head and shoulders passport photo of Clifton A. Shook, Professor of Chemical Engineering.