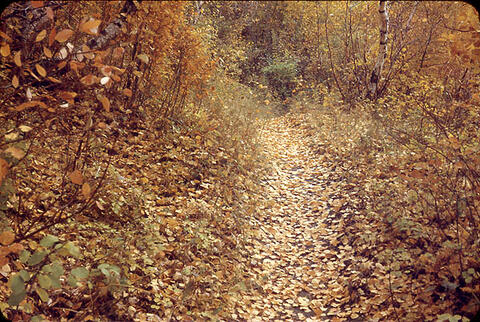 Path through the woods

Leslie Gale Saunders was born December 3, 1895 in London, England. He attended Highgate Grammar School but before completing London Matriculation emigrated to Canada at the age of 16. He had been sent to Nova Scotia by his father to investigate fruit growing possibilities and subsequently entered the Truro Agricultural College. It was while at Truro that Saunders first became interested in entomology. In January 1919, he was permitted, despite his failure to matriculate, to attend Macdonald College at McGill University. By 1921, Saunders had completed both a B.Sc. and M.Sc. and was awarded the "1851 Exhibition Scholarship". This allowed him to enter the Molteno Institute for Medical Parasitology at Cambridge. In 1923, while at Cambridge, he was invited to join a private expedition to Brazil. He was granted a Ph.D. in 1924 and then joined the staff of the U of S the following year where he was assigned to teach invertebrate zoology, entomology and parasitology. By 1927, Dr. Saunders was able to spend the summer at the Pacific Biological Station at Departure Bay on Vancouver Island. Because of budget restraints, all bachelors on staff at the University of Saskatchewan were asked in 1932 to take a year off with three months salary. Saunders was able to secure a teaching job at Hong Kong University for the fall session. The new year found him in Singapore where he met a fisheries official who asked Saunders to join him on a 1300-mile tour inland. He returned to Departure Bay for the summer and then was off on a round the world tour that took him to Canton, Macao and a trip along the northern edge of Borneo, upriver to Sarawa. Before he returned to Saskatoon he spent time in Ceylon, the Near East and England. In 1943, Dr. Saunders went to Central America and carried out a study of tropical diseases for the United States government. In 1956, he went first to Costa Rica and then to the Philippines to study cocao plants and the midges that pollinate them. He retired in 1961 and was named Professor Emeritus. One more trip, this time to Ghana, came before he settled in Victoria where he lived until his death in 1968. While Dr. Saunders built a solid reputation as a biologist, his work as a photographer brought him much praise and acclaim. He was elected Associate of the Royal
Photographic Society of London and had work displayed in leading galleries in Canada, the United States and Great Britain.

A path covered with fallen leaves is seen winding its way through a forest in autumn.