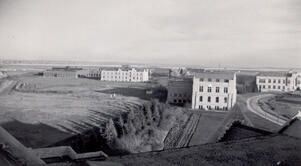 Bio/Historical Note: In the immediate post-World War II period construction was centred on what was called the “Agriculture Group” of buildings including the Virus Laboratory, School of Agriculture and the Soils and Dairy Laboratories. All three were built between 1948 and 1949, all were flat-roofed structures and all of them would be named after prominent members of the College of Agriculture’s faculty. They also introduced a fourth major building material to campus, yellow brick, which was chosen when the preferred greystone was unavailable. The campus was now colour coded: Engineering, red brick; Agriculture, yellow brick; and the Arts and the Sciences, stone. The main portion of the Soils and Dairy Science Building was divided more or less equally between the two departments. Greenhouses attached to the south end of the building were occupied by Field Husbandry and Forage Crops. The new Dairy Laboratory housed the latest equipment to process milk and milk products and supplied the University with all its milk, cheese and cream needs. In 1957, the building was renamed the John Mitchell Building after the professor and head of the Soils Department and director of the Saskatchewan Soil Survey who had died two years earlier. With the opening of the College of Agriculture Building, the John Mitchell Building became vacant in 1991. It was decided that Drama should move out of the Hangar Building and fill the space. After several renovations, including the conversion of the two large cheese and soil laboratories into theatre space, The Drama Department took up residence in September 1993.