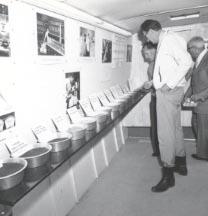 People looking at the new grain grading system at Crop Development Day. This mobile van was sponsored by the Canadian Grain Commission that featured a detailed explanation of the system.

Bio/Historical Note: In 1910 the Saskatchewan Department of Agriculture turned over to the University the responsibility for the development and delivery of agricultural and women's extension programs throughout the Province. To fulfill this mandate, the Department of Agricultural Extension (1910) and Women's Work (1913) were established within the College of Agriculture. Initially the activities of Agricultural Extension focused on services to the Agricultural Societies--short courses, institutes (meetings and conferences), plowing matches, field crop contests, stock judging, etc. Starting during the war years, a Better Farming Train toured the province providing lectures and demonstrations and presenting exhibits on matters pertaining to agriculture. In 1915 "educational holidays" or camps were initiated for farm boys and girls and in 1918 4-H clubs were formed throughout Saskatchewan. Farm and Home Week, a period of exhibits, lectures, and demonstrations at the University, was introduced in the early 1930s. Special projects and programmes for rural women were offered through Homemakers Clubs, established in 1911. In addition to basic domestic activities, women received advice and instruction in fruit growing, tree planting, home nursing, water supply and purity, libraries, health and welfare services, etc. Adult Education services, begun in 1938 in response to forces for social reconstruction, consisted in part of groups formed to discuss planning, economics, cooperatives, government institutions and policies, international affairs, trade unions, etc. This was a logical expansion of the variety of information (bulletins, leaflets), informal (lectures, demonstrations), public (testing, analyses), professional (training), and cultural (drama, music) services, as well as a variety of services to governments at all levels. In 1949 the work of Agricultural Extension and Women's Work were combined in the Department of Extension. It remained a department in the College of Agriculture until 1963 when administrative responsibility was transferred to the Office of the President and renamed the Extension Division. Since the 1970s non-degree programs were offered in the areas of agriculture and horticulture, women, business, languages, indigenous people, community development, liberal studies, arts, seniors, science and technology, career development, and adult education. The name changed again in 1979 to Division of Extension and Community Relations. It was changed back to Extension Division in 1990. The Extension Division was disestablished on 1 July 2007, and replaced with three new departments.