Bio/Historical Note: In the immediate post-World War II period construction was centred on what was called the “Agriculture Group” of buildings including the Virus Laboratory, School of Agriculture and the Soils and Dairy Laboratories. All three were built between 1948 and 1949, all were flat-roofed structures and all of them would be named after prominent members of the College of Agriculture’s faculty. They also introduced a fourth major building material to campus, yellow brick, which was chosen when the preferred greystone was unavailable. The campus was now colour coded: Engineering, red brick; Agriculture, yellow brick; and the Arts and the Sciences, stone. The main portion of the Soils and Dairy Science Building was divided more or less equally between the two departments. Greenhouses attached to the south end of the building were occupied by Field Husbandry and Forage Crops. The new Dairy Laboratory housed the latest equipment to process milk and milk products and supplied the University with all its milk, cheese and cream needs. In 1957, the building was renamed the John Mitchell Building after the Professor and head of the Soils Department and director of the Saskatchewan Soil Survey who had died two years earlier. With the opening of the College of Agriculture Building, the John Mitchell Building became vacant in 1991. It was decided that Drama should move out of the Hangar Building and fill the space. After several renovations, including the conversion of the two large cheese and soil laboratories into theatre space, Drama took up residence in September 1993. 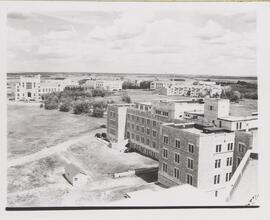 Elevated view looking northeast over the rear of the College of Medicine Building. Administration, Physics, Chemistry and student residence buildings in background. 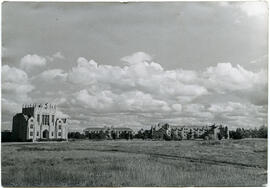 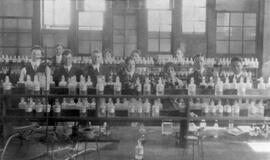 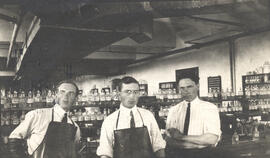 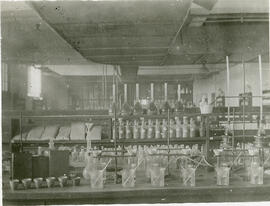 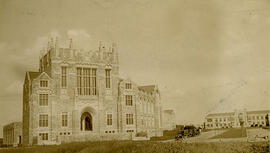 View looking northeast at the Chemistry Building. Cars parked in centre of image, with College Building visible in background. 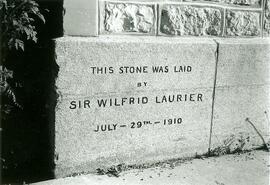 Close-up of the cornerstone laid by Sir Wilfrid Laurier, Prime Minister of Canada.

Bio/Historical Note: Many articles were placed in the cornerstone. These included a Bible, a Psalter and Hymnal in Cree syllabic, a scroll, the daily papers, a Waghorn's Guide and a telephone directory. Many university items were also added, such as calendars, pamphlets and reports, photographs of officials and of the grounds; plans and specifications of the buildings were included. More general items were: samples of market grades of wheat, a list of plants, an account of the past cultivation of the college farms, a sketch with the history of the Territories, and of the province, together with provincial and city pamphlets.
From The Daily Phoenix, 30 July 1910.

Bio/Historical Note: Designated as a provincial heritage property in 1982 and as a National Historic Site in 2001, the University of Saskatchewan's first building has long served as the architectural, intellectual and emotional cornerstone of the campus. Designed by Brown and Vallance, the College Building was originally intended ultimately to house the College of Agriculture; but from the start, served numerous purposes. As early as April 1910, the floor plan included space for milk testing, butter making, cheese making, grain work; a gymnasium; several classrooms; offices for the Registrar, Dean of Agriculture, Director of Extension, and President; the original "faculty club"; laboratories; the library; and quarters for the janitor. After a sod-turning ceremony on 4 May 1910, the cornerstone was laid by Prime Minister Wilfrid Laurier on 29 July 1910. It was constructed between 1910-1912 by Smith Bros. and Wilson general contractors. The building was officially opened by Walter Scott, Premier of Saskatchewan, on 1 May 1913. The College Building serves as a memorial to much of the university's history: numerous plaques to individuals and organizations can be found in its interior, including memorial ribbons honouring members of the university community who served in the First World War. In 1997 the university created "Nobel Plaza" in front of the College Building, honouring two Nobel Laureates associated with the University: Gerhard Herzberg and Henry Taube. As the university grew, the College Building gradually became the administrative centre for the university. By the 1950s most of the original teaching facilities were taken over by new or expanded offices including those of the registrar, controller, alumni and news services, and presidential staff. The building became known as the Administration Building at this point, and later the "old Administration Building" to distinguish it from the new wing. This expansion continued through the 1960s and 1970s, particularly with the appointment of a university secretary and vice-presidents. While Convocation Hall became too small for regular Convocation ceremonies by 1930, it maintained its original, broader function as a venue for concerts, meetings, lectures, and other events. Parts of the building were declared to be unsafe in 1979, which led to the construction of the new wing of the Administration Building, opened in 1987. Most of the original building was closed, but Convocation Hall remained in use until 1997. The building was reopened and officially rededicated as the College Building in September 2005 after a major rehabilitation project. The rehabilitation was reported to be "one of the largest heritage conservation projects in Canada - second only to the work being done on Parliament Hill." In addition to senior administrative offices and Convocation Hall, it became home to the Museum of Antiquities and new gallery space for the University Art Collection. Upon completion in 2012 the University Board of Governors renamed the Administration Building the Peter MacKinnon Building, in honour of Peter MacKinnon, retiring University President and a driving force behind the project. 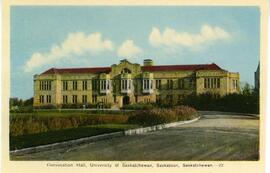 Looking east across the Bowl at the College Building. 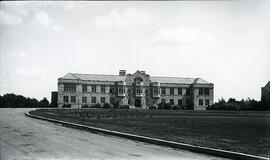 Looking east at the College Building with road and the Bowl in foreground. 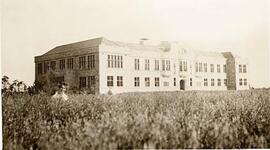 Looking north at College Building with [oats] in front. The head and shoulders of an unidentified woman can just be seen above the height of the plants. 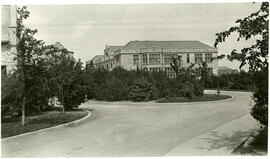 Looking north at the College Building. Road and landscaping in foreground; partial view of Saskatchewan Hall at left. 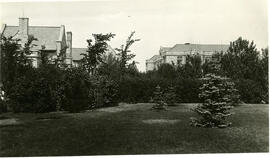 Side view of the College Building from the south showing the grounds and shrubbery. 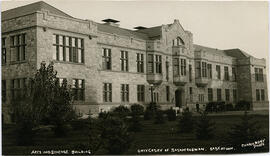 Looking southeast at the College Building. Small evergreens in the foreground. An unidentified man stands on the steps with a car parked nearby.