14. Studies on the Reliability of Tests.

This series contains records relating to Williamson's university committee work, and most extensively documents his work with the International Committee and international studies. In addition, it contains some reference materials from the Centre for Community Studies, and includes correspondence on a variety of issues facing the University over time.

File consists of photocopies of military documents containing information regarding the 14th Light Horse and 209th Battalion. Includes militia lists from 1912 to 1927. 15 men at a military camp

All wearing berets or caps, one in uniform, some in long white aprons. Military tents in background.

Photograph shows a group of men, identified as 15 year bus drivers. No day date on envelope. 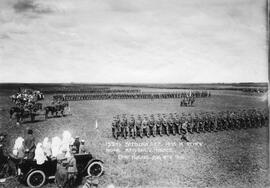