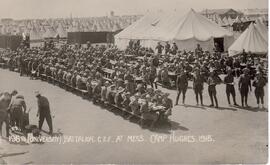 Soldiers seated for meal at outdoor tables. Four soldiers working at left; six soldiers standing at right. Tents and other buildings in background. 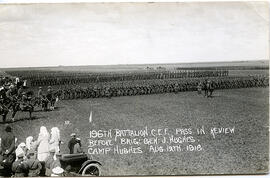 Soldiers in line formation in an open field at Camp Hughes, Manitoba, marching past Brigadier General J. Hughes and other officers as they salute. "B" Company, made up of University of Saskatchewan volunteers, would form the second line under the command of Major J.P. Oliver (Engineering), C.J. Mackenzie being a platoon commander. 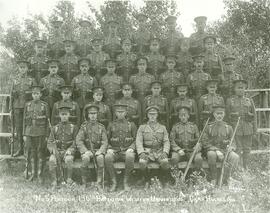 Five rows of soldiers of No. 5 Platoon in uniform and holding rifles; at Camp Hughes, Manitoba. 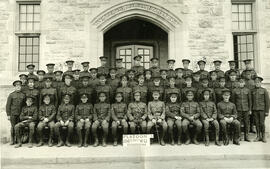 Four rows of soldiers in uniform at the front entrance of the College Building. Sign at their feet reads: "Platoon 5, 196th Batt. W.U. Saskatchewan." 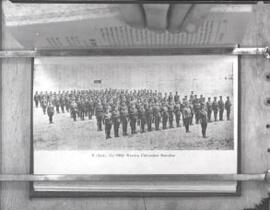 Battalion, on parade, standing in line formation in an open field. The book is braced and held by hand. Caption beneath the photograph reads "B (Sask.) Co. 196th Western Universities Battalion." 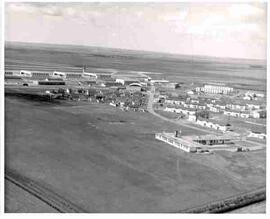 Aerial view of the buildings and roads at Canadian Forces Base, Moose Jaw, Saskatchewan 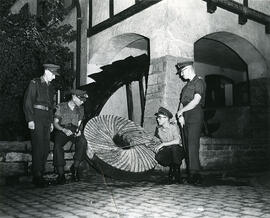 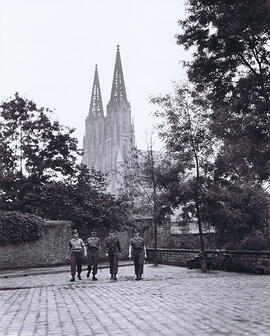 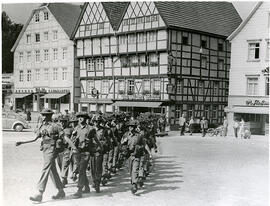 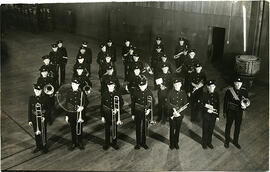 COTC band members standing in rows with their instruments. Indoor view with other cadets visible at upper left and a unique wood burning stove in background at right. Taken at Saskatoon Armouries.. 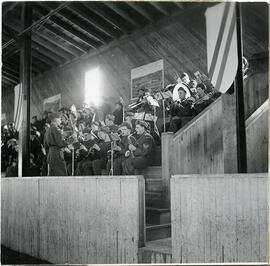 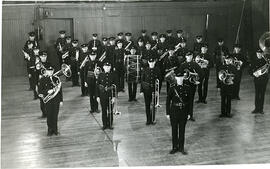 Bio/Historical Note: James Clinkskill owned a large white frame house with a large, two-story veranda overlooking the South Saskatchewan River from 1904 to 1911. The house was located at 152 Spadina Crescent East. In 1911, the Armouries were constructed and a Sergeant’s Mess was built in 1912. The Clinkskill house was used as the Officers’ Mess and as the home of the Armouries caretaker. The United Services Institute, whose members were former members of the Canadian Armed Forces, was located in the former Clinkskill house and hosted many social events. In 1922 a barn was moved into Saskatoon and used as a drill hall. When the Hugh Cairns VC armouries were built in 1960, the Saskatoon Armouries were sold to Harry Landa for $2000 and removed. The former Clinkskill house was demolished in 1960. 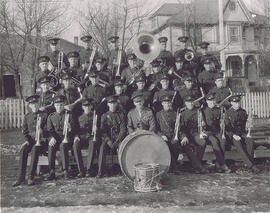