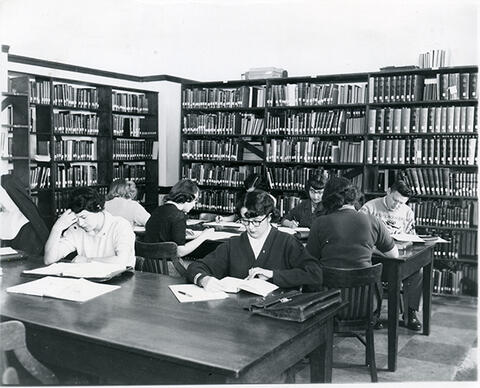 View of students studying in the Library Reading Room in the Administration (College) Building.

Bio/Historical Note: Though the first recorded withdrawal from the University Library occurred in October 1909, nearly five decades passed before the Library had its own building. The early collection was housed either on the second floor of the College Building (later known as the Administration Building) or was scattered among a number of small departmental libraries. Plans for a new library building in the late 1920s were ended by the start of the Great Depression; but a dramatically reduced acquisitions budget was offset by a grant from the Carnegie Corporation in 1933. In 1943 the University hired its first professional Librarian. A combination of provincial grants and University fundraising financed the construction of the Murray Memorial Library. The library was named after the University’s first President, Walter C. Murray. Designed by noted Regina architect Kioshi Izumi working under H.K. Black, Architect, it marked a change in campus architecture away from the more angular and elaborate Collegiate Gothic style to that of the less expensive cube. Building materials included granite at the entrance and Tyndall stone as a wall cladding and window trim. In addition to the library, the building housed the College of Law, an office of the Provincial Archives and a 105-seat lecture theatre equipped with the latest in audiovisual teaching aids. The most dramatic transformation took place between 1970 and 1976 when a six floor south wing was added along with an extensive renovation of the 1956 structure. Designed by BLM, Regina, the south wing was unlike any other building on campus. Clad in Tyndall stone panels made to look like concrete (through a "bush hammered" finish), the grey almost windowless building is industrial and utilitarian in appearance. The University's master plan required buildings in the core of campus to be clad in stone. However, the "bush hammered" finish was used since the Library addition was built during a period that saw the flowering of "Brutalist" Architecture, so called because of the wide use of exposed concrete. The new (south) wing, originally called the Main Library, was officially opened on 17 May 1974, and also became the home of the Department of Art and Art History, the College of Graduate Studies and the University Archives.