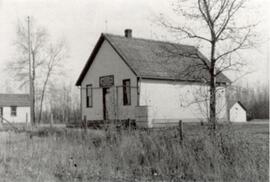 Norman "Little" Vickar was born in 1921 to David Vickar and Sophie Vickar (Gelman) on a farm north of Brooksby. After attending school at Edenbridge S.D. #2930 Norman started farming. He took a break from farming for almost five years while he served in the Royal Canadian Air Force as a L.A.C. (Aircraft man). After completing his military service Norman returned to farming until his retirement in Melfort, Saskatchewan.

The fonds contains one black and white photograph of the Edenbridge S.D. #2930 building near Gronlid, Saskatchewan. The photograph was taken in between 1913 and 1960 and was reprinted in 1999. It is from Vickar Norman's private collection.

The photograph was donated by Norman Vickar to the Melfort and District Museum.