Robert (Bob) Adams was born in 1924 at Alsask, Saskatchewan and completed high school there. He enrolled at the University of Saskatchewan in 1942. During the Second World War, he served with the Royal Canadian Infantry. After the war, he completed his BA in 1946 and a BEd in 1949. He married Marge Pascoe in 1952.

Adams was a consummate track athlete and coach. He was a charter members of the Saskatchewan High School Athletic Association, was the first coordinator of physical education and high school athletics for the Saskatoon Public Board of Education and for years was a coach and executive member with the Saskatoon Track and Field Club. He was inducted into the Saskatchewan Sports Hall of Fame in 1975 and into the Saskatoon Sports Hall of Fame in 1986. Adams retired to Victoria, British Columbia. He officiated at track meets in BC until 2018 when he was 93.

Adams received numerous honours, including entry into the Saskatchewan Sports Hall of Fame, the Canadian Olympic Hall of Fame and the Athletics Canada Hall of Fame. He died in 2019 in Victoria at age 94. 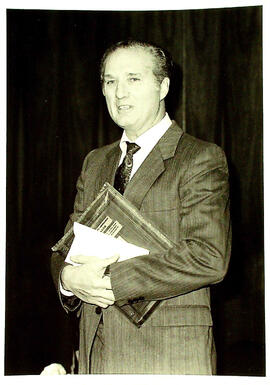 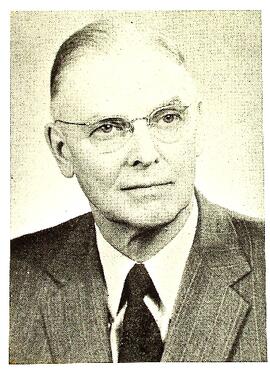 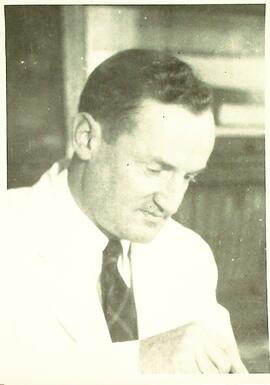 The company produced sound recordings, films, radio and television commercials and jingles, slide-tape presentations, print advertising, including promotional brochures, and photographic work, animation, and other public relations services. During the late 1960's and early 1970's the company did most of the film and news production for CBC Saskatchewan. It also produced films for provincial government departments and for private and crown corporations, and did marketing work for local Saskatoon performers such as the University of Saskatchewan's Greystone Singers and the Saskatoon Boys' Choir.

Born ca. 1934 at Souris, Manitoba, Helen Hase Lumby grew up in Saskatoon where she married John Donald Lumby in 1956. They had three children, Lisa, John Jr., and Jeff.

In Saskatoon, she worked as a writer, producer, operator and performer with CFQC Radio and CFQC-TV in the 1950s. She co-hosted the CFQC programmes "Little People" and "Carnival" in 1957-1958. She also produced the children's television show "Miss Helen's Kindergarten", which aired from 1956-1962, and in the 1960s she was co-host of CBC radio's "The Passing Show", a fifteen minute arts and entertainment program.

From 1961-1981, she and husband John operated a film, photography, television and audio production company under the names Lumby Productions (1965-1981) and Size Small Productions (1981-1988). Helen worked primarily writing advertising copy and doing voice-overs for radio commercials. She also produced and was featured in the "Miss Helen's Kindergarten Party" phonograph records. She was also active in the public relations aspects of Lumby Productions including print, radio and television advertising, press releases, brochures and promotional films.

John Donald Lumby was born in Saskatoon, Saskatchewan, on Dec 19, 1930. He married Helen Hase in 1956. They had three children: Lisa, John Jr., and Jeff. He spent most of his life in Saskatoon, moving to Kitchener, Ontario, after retirement, where he died on Nov. 3, 2017.

He studied engineering at the University of Saskatchewan and graduated from the Officer's Indoctrination Course, University Reserve Training, in June 1950. In 1964, he also received a Certificate of Business Administration from the U of S.

He initially apprenticed in industrial and commercial photography at Hansen Photographers in Edmonton. In the early 1950s, he worked as a photographer with the Saskatoon Star-Phoenix, and later served as Director of Photography at CFQC-TV in Saskatoon from 1955 to 1965. From 1961-1981, he and Helen operated a film, photography, television and audio production company under the names Lumby Productions (1965-1981) and Size Small Productions (1981-1988).

Oliver Lodge opened its new building in 1962 and became an incorporated body in 1963. Saskatoon Balmoral Pastoral Charge was formed in the mid-1950s, part of Saskatoon Presbytery and consisting of Balmoral United Church. The charge officially closed on June 30, 2004.

Saskatoon Bethel Pastoral Charge was formed between 1925 and 1940, part of Saskatoon Presbytery. The original Bethel United Church was built at 905 - 5th Street in 1927, as Clarence Avenue Mission, then was renamed Bethel United Church, in 1929. As of 1940, it was listed as an aid-receiving charge, with a student minister and additional preaching points at Blackley and Floral. By 1951, it was listed as Saskatoon Bethel-Floral Pastoral Charge but it returned to the name Bethel Pastoral Charge by 1958. The charge closed June 30, 2011.